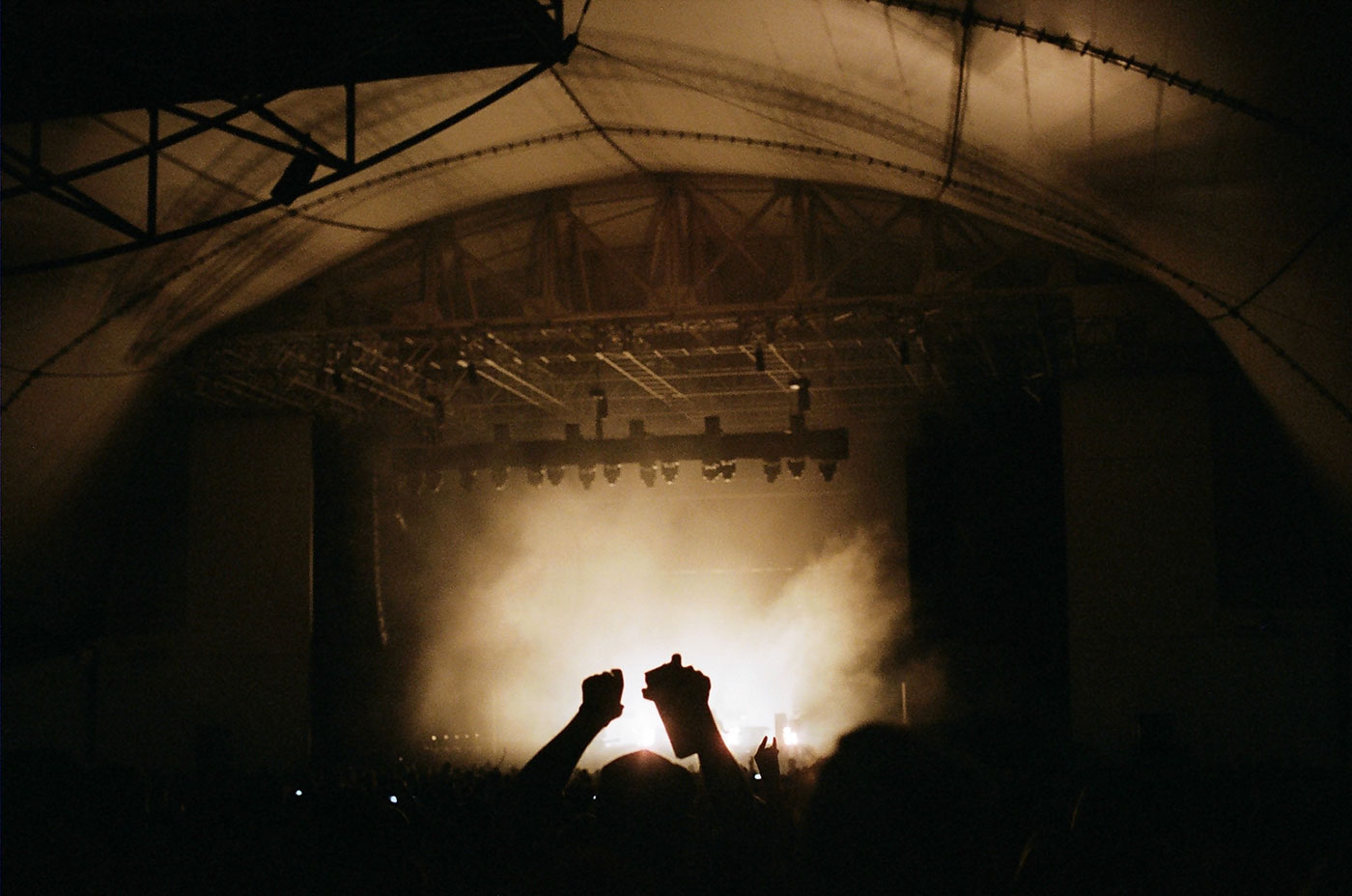 The Monkee-Boy team had a fantastic weekend at the Austin City Limits Festival this year. Here are our staff picks of the best performances all weekend. 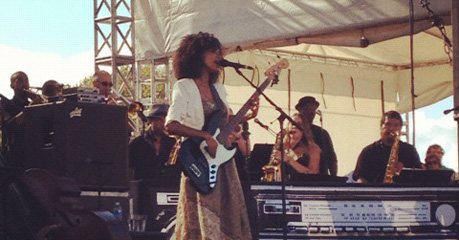 Move over Flea. Move over Sting. Move over Geddy Lee... there is a new Sheriff of Bass in town and her name is Esperanza Spalding.

Though I could only make it Friday and I know there was a ton of great music over the weekend, the best show I was able to see was probably Esperanza Spalding -- the Grammy winning, funky bass playing, skit-skatting, afro-sporting, song bird.

Most of the music was from her new "Radio Music" album, which honestly isn't my favorite of hers ("Esperanza" circa 2008 will blow your mind), but is still very solid as there is no such thing as a bad Esperanza album. I have said it before and will say it again -- I can almost guarantee that she was one of the most talented musicians at ACL -- being able to play extremely complicated bass lines while simultaneously singing and scatting on top of them was really a treat and raises the bar for bass musicians.

I know this show wasn't for everyone especially if you have had a lot to drink and are looking to get your mellow rave dance on, but if you are a jazz lover and enjoy top notch musicianship you really can't go wrong with Esperanza.

Bonus points: Front row standing room in the shade + she beat out Beiber for the Grammy. 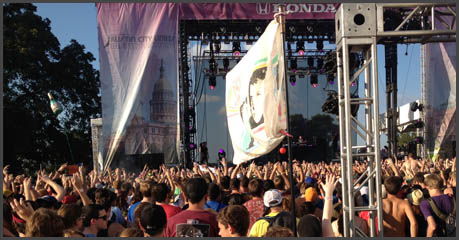 I'm at Zilker Park on Friday of ACL Festival -- I’m an older guy, so you know I’m going to be with the other bald guys listening to Weezer. I really wanted to hear Esperanza Spalding (I did and she was great). But that left me with this giant, hour-and-forty-five-minute hole in-between the two shows, so I figured I’d roam around and check out a couple of stages.

I started out at A-Trak and never left. I found a couple of friends right before he took the stage and then all of the sudden a dance party broke out. I never listened to much A-Trak before the show, and, like I said, I really didn’t have it circled on my schedule, but it had everything you want from a great festival show -- a lot of energy, fun music, the crowd was into it. The fact that it was totally unexpected made it that much better and memorable.

After A-Trak, I went over and caught Weezer as the sun was going down. It was a good show and I had a good time. But, when I got to the office on Monday, I had to pull up A-Trak on Spotify so I could start bobbing my head all over again. 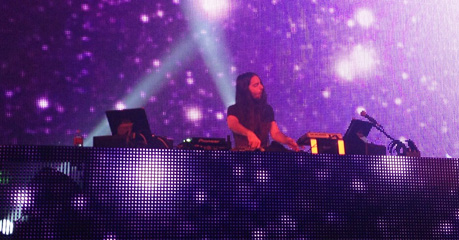 My favorite ACL show was Bassnectar. The crowd was so massive it was like a sea of people. I lost my friends during the Shins and I was frantically trying to find them in this massive crowd. Text messaging was delayed about 30 minutes due to the network being clogged. I went to our meet-up spot, the ART sign, but they weren't there. I almost gave up looking when I decided to walk across the Bassnectar crowd to our other meet-up spot near the Lady Bird Lake exit. Apparently, my friends decided at the same exact time to look for me at the ART sign, and we actually crossed paths and ran into each other at the bar! It was a magical moment. If you were there, you know what kind of crowd it was and how impossible it would be to find someone you were looking for. But we found each other and danced away during the rest of the show! 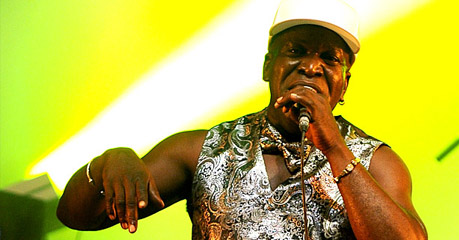 Austin City Limits Festival got it’s name from the PBS television show “Austin City Limits” which focused on Country, Folk, and Rock. C3, the company behind both Austin City Limits and Lollapalooza, makes an effort to stay true to these roots in their line ups. Most of these acts play in the tented stage which makes for an almost club-like experience. This year, ACL featured Barrington Levy who is a reggae legend and is most well known for his song “Murderer”.

After a most appropriate introduction, Barrington stormed onto the stage with an astounding amount of energy for a man of his age. He was extremely well dressed and in shape.

His stage presence alone was enough to bring the entire crowd to a frenzy. It was clear from the start that Barrington came to put on a show and he accomplished his goal. He danced and sang his heart out and left it all out on the stage. A true showman in every sense of the word. He gave 120% as you can hear it in this video. Up against super power acts like Red Hot Chilli Peppers and Jack White, Mr. Levy is lesser known, but in my humble opinion, put on a far superior show with more soul, fun, laughter and opportunity for the crowd to engage.

Florence and the Machine and Jack White 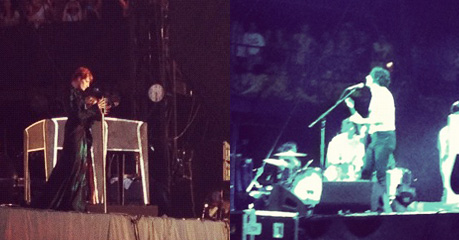 ACL Music festival was whirlwind of music, mud and dancing drunkards. In midst of the chaos I was able to get close enough to several of my favorite bands in order to fully take in their performances. Out of these there are two performances that stood out; Florence and the Machine and Jack White.

Florence's engagement of the crowd was unlike any performer I've ever seen. She talked with the crowd, encouraged everyone to greet their neighbor, even ran around like a forest pixie among them. Somehow, she managed to turn the enormous crowd into what felt like an intimate group of listeners. This all while performing her extremely complicated vocal pieces. The sun was setting as she performed, illuminating her fiery red hair and I could not help but feel happy and completely in the moment. All thoughts of the over-packed hectic festival behind me were indeed shaken off.

Surprisingly, Jack White was just as engaged with the ACL crowd. Prior to the show, there were murmurs in the crowd of a recent performance somewhere that he had left half-way through. People were excited to see him, but guarded about it. That didn't last long. From the moment Jack White and the Peacocks began playing, guards were dropped and the crowd moved. They played a very well crafted set list of White's most popular tunes with a ferver and reconstruction that was startling but welcome. The crowd loved it. Exciting the festival and walking back to my apartment some thirty minutes after his show had ended I noticed a hum running through the crowd of pedestrians. It was his last tune, Seven Nation Army. The crowd was still electrified and carrying the show home with them.

TL;DR Jack White and Florence and the Machine killed it because they were engaged with the audience and played sets built for a festival. 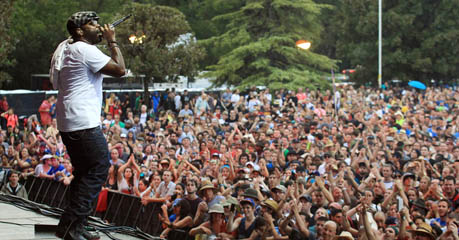 This year’s Austin City Limits Festival posed the question: The Roots or The Shins? Both of these incredibly talented bands were scheduled at the same time on Saturday, leading me to post an informal poll on my personal Facebook page. The results were almost unanimous (including a threat of disownment from my brother). The Roots were the band to see. I’m glad I followed the advice of friends and family. The Roots pumped the crowd up with their nonstop energy. Damon “Tuba Gooding Jr.” Bryson danced and ran around the stage all while playing a sousaphone. The lead guitarist Cap’n Kirk played amazing guitar solos, reminiscent of the rock-n-roll greats of the past, including a cover of Sweet Child O’ Mine. It was an amazing experience to see such incredibly talented musicians! 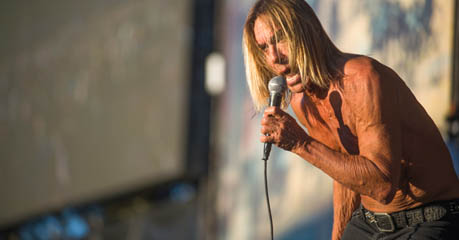 Going into ACL, I was most excited about Big Gigantic and Bassnectar, but another act blindsided my rankings for the top spot. Both of those shows were incredible (especially Big Gigantic in the POURING rain), but I’m a rock ‘n’ roll fan at heart and Iggy & The Stooges reminded me of that.

It didn’t take long for Iggy to start yelling things at the crowd that I can’t repeat here, and once he threw his mic stand like a javelin clear across the stage, I knew it was going to be good.

By the third song he had 50 fans bum rush the stage and there were people less than half his age singing his songs right along with him. Later songs saw him rolling on the ground, jumping down to the crowd barrier, and generally causing havoc all over the stage.

None of this looked routine either. Iggy Pop is known for his stage antics, but he genuinely looks like he’s doing most of this stuff off the cuff. He’s still got it. At 65.

They walked off the stage before the encore in proper punk fashion... by throwing their instruments on the ground. Their encore ended with Iggy’s choice words and gestures for the crowd. And then some Chili Peppers guys came on later.

When two Austin, TX companies partner up, dreams can come true! We were lucky enough to work with Panic Button on their recent website redesign, and we're delighted to announce it's live to the world! 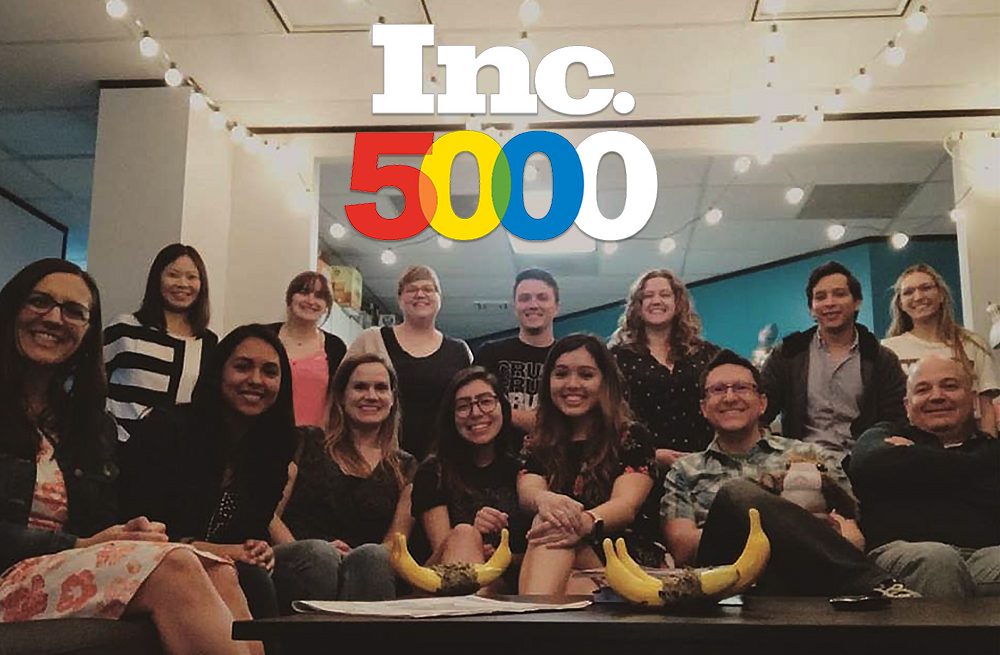 The Inc. 5000 list is a unique look at America's most successful companies in its most dynamic segment — independent small businesses. Guess who made the list this year...